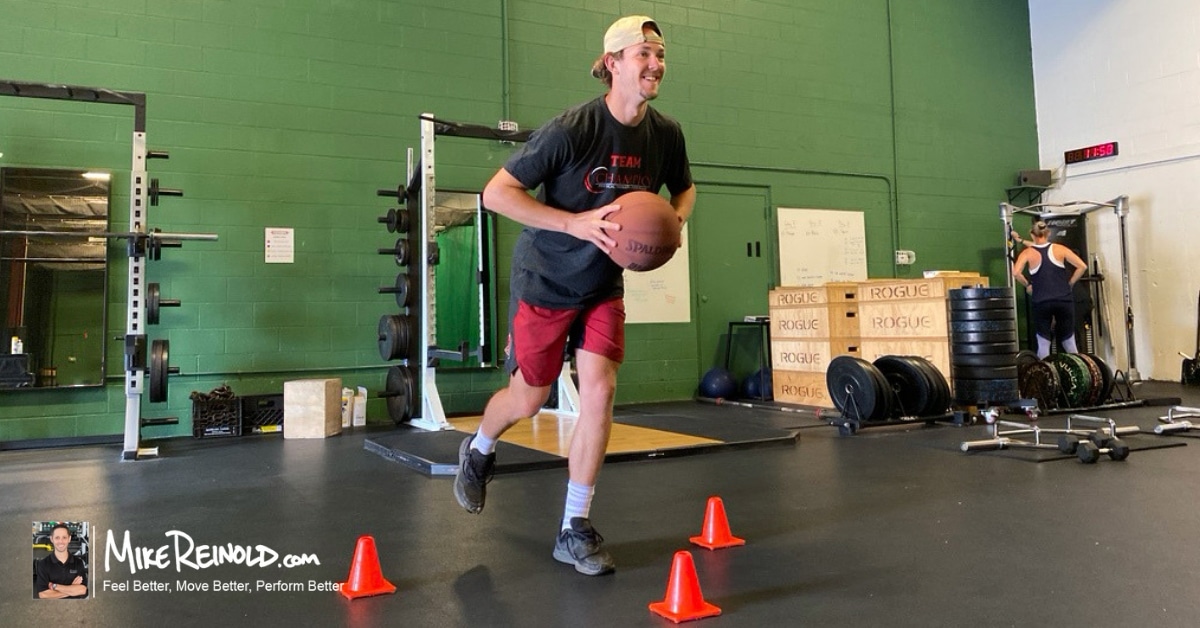 Neurocognitive Training for ACL Rehabilitation and Return to Play Testing

I’m consistently trying to figure out the best methods to allow our patients to return to their sport as safely and effectively as possible.

In this post, I wanted to look at the research on the neurocognitive effects of an ACL tear. This is definitely an emerging field of research that has blossomed the past few years. There are not many studies published on this topic so I hope to better understand and explain what this field is proposing, and how it may impact our return to sport decision making after ACL reconstruction surgery.

Neurocognitive Changes After an ACL Tear

From what I can see, Grooms et al. first talked about this phenomenon in 2015 in a paper in the Journal of Athletic Training. They looked at functional MRI’s of the brain for one ACL-injured participant versus a single matched control participant.  Small sample size, of course, and a pilot study of some sort.

They determined that the ‘ACL-injured participant exhibited increased activation of motor-planning, sensory-processing, and visual-motor control areas. A similar activation pattern was present for the contralateral knee that sustained a subsequent injury.”

The brain activity was absolutely different than the control matched patient that did not have a previous ACL tear.

Based on this one patient, they concluded that “Neuromuscular training that incorporates visual or neurocognitive processing, such as ball tracking or engaging other players, task complexity (reaction and decision making), anticipatory aspects, and cognitive load (dual-task), can address the possible sensory reweighting of visual feedback for motor control.”

We already know that neuromuscular programs can help reduce ACL tears, especially in female athletes. A ton of research shows nearly a 67% reduction in non-contact ACL injuries if these programs are implemented.  But, perhaps by adding a greater focus on visual and neurocognitive processing, we would see an even greater effect.

Interesting findings… but how can we apply this concept to our ACL physical therapy  programs and return to sport testing to make them even better?

Reactive control and athletic decision making needs to become a subconscious response based on sensory and visual input. An external focus of control is needed to optimize neuromuscular control.

In an even more simple term, we as rehabilitation specialists need to create rehab programs that integrate the surrounding environment into each program.

This concept is very different from what we traditionally use in many of our cues during an exercise. We often tell people to prevent their knees from collapsing inward.  Sometimes we even use an external force to pull the knee into more valgus to facilitate a neuromuscular response to prevent that movement.

Instead, maybe we need to use a neurocognitive cue and have our patients to perform drills like a RDL toward an external prop like a cone based on randomized cueing.

It seems similar but using the visual and external input, the brain wiring will be different and potentially allow the athlete to perform this movement subconsciously as their training progresses.

As the person progresses, we can start to combine a visual cue to react prior to beginning a movement. Here’s an example of a simple 3-way hop. But rather than knowing and anticipating the movement, we are cueing the person as to which direction to hop. They subsequently need to react based on the visual stimulus.

We often focus on strength and even neuromuscular control, but by adding an element of visual input and reaction to the direction of the hop, we further challenge the neurocognitive input as well as the neuromuscular output. As you can see here, this professional athlete struggles by trying to anticipate, but then adjusts and improves his reaction. This takes a lot of effort!

This could easily be progressed to include randomized and more complicated cues.

If you really want to start using neurocognitive training, you might want to check out the Blazepods. We’ve been using these at Champion and have loved them. They are lights that can be programmed in a variety of different ways to challenge people even more.

Blazepods are awesome tools to develop reaction time, speed, and agility in athletes. They've become a key part of our neurocognitive rehabilitation as well.

Save 15% by using the link below, no coupon required. Combing a neuromuscular and a neurocognitive training approach may allow a transfer of motor control to subcortical regions and free cortical resources for programming more complex motor actions. This would help to screen out incorrect motor responses by the athlete.

By better understanding this information, we can develop return to sport testing guidelines that can better determine readiness and hopefully reduce future injuries even more.

I’m not going to lie, I struggle to have a formal test that solely determines my athlete’s return to sport.

With that, I wanted to seek out this new research that may help to better determine an athlete’s readiness, both neuromuscularly and neurocognitively.

I stumbled upon this recent Tweet by Ohio University PT and researcher Dusty Grooms (@Dusty_Grooms), so I clicked on his 2 links to read the articles.

The articles really made me think about what we are doing with our patients and the role of the brain. I have always thought that the brain plays a much larger role than what we ever imagined.

I know that we like to focus on ACL graft options, loss of range of motion after ACL surgery, strength training after ACL reconstruction, surgical technique, surgeon, etc., but we continually miss the boat. I am certainly not downplaying those variables and still think they are quite important, especially during the early phases of ACL rehabilitation. But there’s a reason why our ACL retear rates are so high.

Nine males and 13 females were recruited for this study. They performed the traditional hop test which included a single leg hop, single a crossover hop, single-leg triple hop, and single-leg 6m hop.

They also performed these tests separately in which neurocognitive conditions were altered in order to compare the two groups.

The hop test for the neurocognitive group utilized a light system that signaled when each hop trial was initiated. Signals changed color and were randomly activated to force the athlete to anticipate each hop then respond as quickly as possible.

The hop tests consisted of:

Here is an example of the crossover hop test performed in the study, big thanks to Dusty Grooms for allowing us to use this video:

The addition of the neurocognitive task decreased the performance for each crossover hop, triple hop, and 6-meter hop test when compared to the traditional hop test.

The only hop test that was not affected was the single-leg hop test when compared to the traditional manner.

Adding a cognitive challenge resulted in the athletes’ inability to jump as far and as quickly, relative to the traditional hop test.

These results may have implications for our rehab programs to help us better design a more mentally challenging environment for our athletes.

As they described in the study, “the more complex hop tests were devised to challenge different aspects of visuomotor and cognitive-motor function, as well as increase the complexity.”

Performance declines were affected by environmental stimuli, which may be extrapolated to real-life performances on the field when actions are less rehearsed and more reactive.

I find the topic of neurocognitive training interesting and fascinating. I’m hopeful that what Dusty and others are doing in this field will help future patients’ recoveries. I also think that it will help clinicians to better understand the complexities of post-surgical ACL rehabilitation.

With our ACL outcomes being far from perfect, I feel as if this new field of research could offer potentially promising outcomes once we better understand and implement these research findings into a comprehensive ACL reconstruction physical therapy program.

Learn How We Evaluate and Treat the Knee

We discuss exactly how to evaluate and treat the knee in our online knee course, including ACL reconstruction and neurocognitive training. If you are interested in learning our full approach and becoming a knee specialist, our course has a lot to offer. You’ll learn exactly how we evaluate and treat the knee and become an expert at knee rehabilitation.