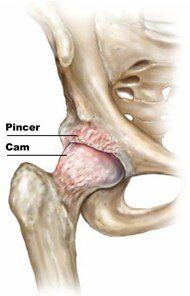 Femoroacetabular impingement is a pretty hot topic right now.  This week, we have a great guest post from frequent contributor Trevor Winnegge.

Recently, femoroacetabular impingement, or FAI, has been increasingly recognized as a cause of hip pain. While femoroacetabular impingement can be a source of hip pain at any age, this post will focus primarily on the adolescent and young adult.  Femoroacetabular impingement is considered a cause of labral and chondral injuries as well as secondary osteoarthritis of the hip. Emerging evidence suggests that early surgical intervention improves function and perhaps prevents or delays the onset of degenerative changes in the hip joint.[1] I hope to provide a thorough overview of FAI, the signs and symptoms of it, and how to treat FAI in an effort to allow us to play an important role in the management of these patients.  (Photo from Bryan Kelly)

What is Femoroacetabular Impingement?

Femoroacetabular impingement occurs when the femoral head and acetabulum rub abnormally, resulting in damage to the articular cartilage and/or the labrum, as well as limited range of motion (ROM). FAI is commonly classified into 3 forms

These are clearly seen in the following illustration taken from Lavigne et al.[2]: Pincer impingement is caused by an acetabular abnormality, usually anterior, resulting in overcoverage of the femoral head. This could be an isolated bony protrusion or it could be a degree of acetabular retroversion. Here the ROM is limited as the femoral head impacts the extended acetabulum which can also lead to labral tears and chondral lesions.[5]

Femoroacetabular impingement is linked to childhood hip disorders such as Legg-Calve-Perthes Disease, Slipped Capitol Femoral Epiphysis, hip dysplasia, septic hip, and prior fractures of the pelvis or femur. [7] Despite those correlations, the majority of FAI cases are of unclear etiology[8]. It is theorized that physeal stresses placed on the femoral head and/or acetabulum during development may play a key role in the onset of FAI. Activities such as gymnastics, dancing, and rigorous sports during the development process are potential sources of FAI. Diagnosing femoracetabular impingement starts with a good subjective history. Patients will often complain of hip or groin pain- laterally, anterior or posterior. This pain is often acute during a sporting activity or will be insidious onset after prolonged exertion. Patients with FAI are often quite capable of completing their daily tasks, but have difficulty with high demand sports/activities. Typically there is no rest or night pain. When asked to pinpoint their pain, they will often demonstrate a “C” sign, described by Byrd[9], and seen below in this picture from hiparthroscopy-Ireland.com[10].

Patients will report a lack of ROM of the hip, which in an adolescent patient is often described as a functional deficit such as “I can’t do a split anymore” or “I can’t move my leg in this position”. When asked about their activity level, these patients will often be involved in a high level sport or activity such as dance, gymnastics, lacrosse, hockey, tennis, baseball, and football. Objectively, there will be a loss of ROM, particularly hip flexion, IR and adduction. Joint capsule hypomobility may or may not be present. A positive hip impingement sign will often be present, which is flexion, adduction and IR of the hip in a combined movement[11].

Plain film X-rays are most commonly used to view the bony changes of the femoral head and acetabulum. MRI or MR-arthrograms are useful in diagnosing secondary injuries such as chondral lesions and labral tears.

Often times, patients with femoroacetabular impingement get misdiagnosed early on and are treated for a variety of diagnoses such as back pain, hip pain, groin pain, bursitis, piriformis syndrome, tendonitis of iliopsoas, groin strain, apophysitis, and “growing pains”[12].

While surgical management of the femoroacetabular impingement remains the an option for treatment, non-operative care can sometimes be successful. Unfortunately, we can not alter the bony changes, but we can normalize soft tissue length, joint capsule mobility, strength and educate on joint preservation techniques. Think of it as treating a patient with a large bone spur in the shoulder that has subacromial impingement. Treatment can be successful despite the bony changes, if the objective deficits are addressed. The success of conservative care for FAI is largely dependent on the patients willingness to modify their sport/activity and become less active in impact sports.

For most adolescents and young adults, this is not an option. While most patients will try conservative care first, often they are unable to fully participate in their sport/activity and seek further management of their FAI. Surgical management can be done open or via the arthroscope, which is becoming the more commonly used method due to its lower level of invasiveness. Surgical treatment is aimed at addressing the secondary injuries such as the chondral lesions and labral tears. The surgeon will address the primary cause of the femoracetabular impingement, typically performing a decompression/osteoplasty.[13] Post-operative rehabilitation is dependent on the procedure performed (labral debridement vs repair; open vs arthroscopy, etc). Typically, recovery from most FAI surgical procedures is 3-4 months, with the expectation that the patient is then able to return to full, unrestricted activity and sport.

In conclusion, I think it is important that we are aware of femoroacetabular impingement and the presentation of FAI. Given it is often misdiagnosed early on, we can play an integral role in the management of these patients. Early diagnosis and treatment is critical for long term health of the hip joint and to allow the patient a lifetime of active living.

Trevor has been practicing PT for over 10 years. He graduated from Northeastern University with a bachelors in PT and a master of science degree. He also graduated from Temple University with a Doctor of physical therapy degree. He is a board certified specialist in orthopedics and also a certified strength and conditioning specialist. He is adjunct faculty at Northeastern University, teaching courses in orthopedics and differential diagnosis. He is currently the Clinical Coordinator of Rehabilitation at Sturdy Orthopedics and Sports Medicine Associates in Attleboro MA.

Trevor, great post as always.  Femoroacetabular impingement is a diagnosis that we are seeing more of each year, likely from a combination better awareness and diagnostics.  Unfortunately, we have all probably all missed some patients that were having early symptoms of FAI and treating them for the wrong reasons, like groin pain!  Personally, I have seen “groin strains,” “hip flexor strains,” and even “oblique strains” that were probably actually coming from the hip joint.  Bottom line to me, if the symptoms and exam are not adding up or the person is not responding to treatments be sure to clear the hip of FAI symptoms to make sure you are not missing femoroacetabular impingement.

In regard to treatment, there really are some similarities to the shoulder that can help take the “fear of the unknown” out of treating the hip.  For example, a pincer lesion is really pretty similar to hooked acromion.  How do we treat that in the shoulder?  Open up the subacromial space with retraction and posterior tilt of the shoulder.  How would we treat the hip?  Open up the joint with posterior pelvic tilting, and gaining mobility of the groins and hip flexors.  Just one quick example but enough to get our brains rolling! Two Exercises You Need in Every Program
Scroll to top