Why You Should Be Using Biofeedback in Rehabilitation

This week’s article is an excellent guest post from my friend Russ Paine, PT, discussing why and how we should be using biofeedback in our rehabilitation patients.  Russ and I are both big fans of biofeedback but unfortunately, it’s fallen out of favor because insurance companies don’t reimburse it. But that doesn’t mean it’s not effective.  And now, there’s a new biofeedback device, the mTrigger, that uses an app on your phone that is amazingly easy to use and affordable. I think this is going to be a real game-changer.  And was nice enough to offer my readers 10% off if they use coupon code REINOLD! More details below, but check out the article and our video first!

Why You Should Be Using Biofeedback in Rehabilitation

I have been involved in the evaluation and treatment of sports medicine injuries for 33 years.  I have been very fortunate to have a “true” sports medicine practice that predominantly includes professional, college, high school, amateur, and aging athletes.  Having this type of clientele has forced me to explore and pursue restoring full function in the timeliest manner, being very careful to not cause harm using an aggressive approach.

I believe that one of the secrets to having a successful return to sports with minimal adverse effects is fully restoring muscle function.

Although many aspects of our field have seen excellent advancements and growth, we continue to combat one of the most difficult challenges following injury and surgery, muscle atrophy, and weakness.

Restoration of muscle function should not only be measured by muscle force output and scores obtained on functional tests but neurological function. In my practice, establishing normal neurological function following knee surgery is goal number one for our patients’ initial step on the path toward a successful return to function.

The Use of Biofeedback in Rehabilitation

So how do I do this?  The use of biofeedback is my preferential method of attacking the neurological deficit following surgery or injury.

New advances in biofeedback devices have recently allowed the ability to provide a general assessment of the patients’ EMG neurological status. The subjects’ ability to fire the inhibited muscle may now be conveniently measured by recording EMG activity of the involved extremity and comparing this to the opposite normally functioning muscle group.

The primary rationale for the use of biofeedback is the belief that the patient should begin to use their own “electrical system” as soon as possible through a volitional contraction.

The concept known as the order of recruitment lends support to the use of biofeedback to enhance volitional contraction.  This order is based on the size principle. Heinemann’s size principle states that under load, motor units are recruited from smallest to largest. In practice, this means that slow-twitch, low-force, fatigue-resistant muscle fibers are activated before fast-twitch, high-force, less fatigue-resistant muscle fibers.

When using a biofeedback device, the clinician sets the goal for the inhibited muscle so that a strong voluntary effort is required by the patent for each contraction.  This is visible to the patient and forces a strong contraction to reach the pre-set goal. I believe that voluntary contraction using biofeedback produces the greatest results in restoring muscle function early.

Neuromuscular electrical muscle stimulation (NMES) is often used to stimulate muscle contraction.  There is a vast amount of literature supporting NMES for use during rehabilitation. Until recently, NMES has been a reimbursable modality, thus there was much financial support to research its’ effectiveness.

Biofeedback has not been reimbursable and that may have had an effect on the comparative lack of literature.  One article from Draper and Ballard supports the use of biofeedback over NMES.  This article compared the two modalities during ACL rehabilitation.  After 6 weeks, the biofeedback group was shown to provide greater quadriceps isometric muscle strength than NMES treated group.

When using NMES, all nerve fibers are stimulated simultaneously.  This, in my opinion, is not as effective as biofeedback because the order of recruitment from small to large diameter nerve fibers is not sequential as is the case with voluntary contraction.  NMES actually recruits the large-diameter nerve fibers first because they are more excitable, as large diameter axons have less resistance to firing. Atrophy of muscles has predominate effects on the slow-twitch smaller diameter Type I  fibers, so recruiting these muscle fibers is critical to reverse the effects of muscle inhibition and atrophy.

How to Use Biofeedback in Rehabilitation

I use biofeedback on virtually every knee patient that has decreased neurological EMG output.  As previously mentioned, we are able to use a new device to provide a side to side assessment of EMG activity.

This information as also very educational and motivational to the patient as they can see the actual deficit via visual EMG numbers between normal and involved.

Cycles of 10 seconds on and 10 seconds off are utilized during the 10-minute biofeedback session.  My instructions to the patient for quadriceps re-education are to “tighten your muscle and force your knee straight”.  Progress is continued to be monitored on a weekly basis to measure the change in EMG activity, as shown using the biofeedback application.

The Biofeedback device that we use utilize has an amplifier that sends the measured EMG activity via a Bluetooth signal to an android or IOS device with the appropriately downloaded software application.

This is available for home use as well as clinical use.  Patient reported motivation using this type of biofeedback product is very high as they can actually visualize their intensity of muscle contraction when performing home exercise programs.  There seems to be an interesting psychological connection between the use of one’s personal smartphone or computer pad and their muscle activity.

Lack of extension of the knee has been shown to have an adverse effect on knee function.  Loss of extension alters the gait pattern and can produce abnormal stresses to the patellofemoral joint.  Due to a lack of quadriceps control, many quad inhibited patients will ambulate with a flexed knee gait pattern.

The use of biofeedback can be used to combat this common malady often associated with post-op care of the knee.  Lacking quad control, patients’ are unable to eccentrically control the knee flexion moment that occurs during single-limb balance.  A quad inhibited patient will assume this flexed knee position because they “know” the position of the knee during single-limb balance.

This sets up the knee for a co-contracted state and presents as muscle splinting until normal muscle tone and function are restored.  This muscle splinting will continue to exacerbate the lack of extension in the knee. Biofeedback can be very effective at addressing this issue.

With muscle splinting, we want to teach the patient to relax the hamstring muscle during knee extension stretching, thus negating the effect of a contracting hamstring muscle.  The patient is placed in a prone position, with both patella over the edge of the table. Electrodes are placed over the hamstring muscle. Unlike the inhibited quadriceps muscle where we are trying to elicit a more perfect contraction, the biofeedback unit is now used for relaxation purposes.  As the patient uses the relaxation mode of the unit and learns to control the overly active hamstring contraction immediate increase in passive knee extension is observed.

This position is maintained for a 10 minute period.  Once the patient has “learned” to control the hamstring overactivity, a lightweight may be applied for the 10-minute period to produce a low-load long-duration stretch.  Change in knee extension can be measured using heel height difference measurement technique. Dale Daniel described this measurement and showed that 1cm of HHD = 1 degree of flexion contracture.

Note from Mike: That’s a great example of how you would use biofeedback to work reducing muscle activity.  It’s not always used to increase activity. Another way we use it is to use both channels together on 2 different muscle groups.  Imagine doing a bird dog or glute bridge with the pads on the glutes and low back. You would focus on performing the drill with high glute activity and low back activity.  It’s pretty neat.

Return to play is a hot topic in rehab right now.  It’s difficult to determine if the athlete is ready to return to sport.  There are many obstacles when assisting your athlete to the ultimate goal of returning to sport with pre-injury level of performance.

Too often, a shift is made during the rehabilitation process to more functional activities and reduced emphasis on strengthening.  If your patient continues to possess a decreased EMG signal compared to the normal side, it will be highly unlikely that they will be able to resume the pre-injury level of function.

With biofeedback, we have a tool that makes certain that we have completed one of the early critical steps in the process of rehabilitation – restoring and measuring the normal neurological function of the inhibited muscle group.  Don’t allow decreased EMG function to be one of the obstacles to continue to linger.

I thought that was a great article from Russ.  Many don’t even realize how impactful biofeedback can be as it has fallen out of favor.  Here’s a great video from Russ and I demonstrating the mTrigger device and talking about how and why we use biofeedback:

As you can see, the new device is so simple to use and completely affordable.  That has always been a limitation in biofeedback devices, they were just to clunky and expensive. If you want to get started using biofeedback, was nice enough to offer my readers 10% off their purchase, making this even more affordable.  Click the link below and be sure to use coupon code REINOLD to get your 10% off

Russ Paine, PT, is known for his experience in sports medicine with special interests in injuries to the knee and shoulder, as well as golfing injuries and conditioning. His client list includes many professional athletes who have sought his expertise to help them recover to their prior level of function. Russ has a long career in sports medicine, having served as rehabilitation consultant to the Houston Astros, Houston Rockets, and NASA. Currently the Director of Sports Medicine Rehabilitation at UT Physicians in Houston, TX, Russ continues to devote his time to research and education while maintaining a busy sports medicine clinical practice.  Russ was inducted into the Sports Physical Therapy Hall of Fame in 2018. As a well-established author and lecturer on topics related to sports medicine, he has lectured at over 500 meetings in the US and abroad. He has published 25 chapters in textbooks and over thirty research articles in peer review journals.

Shoulder Impingement – 3 Keys to the Evaluation and Treatment

Shoulder impingement is a really broad term that is used too often. It has become such a commonly used junk term, such as “patellofemoral pain.”

Unfortunately, the use of such a broad term as a diagnosis is not helpful to determine the treatment process. There is no magical “shoulder impingement protocol” that you can pull out of your notebook and apply to a specific person.

I wish it were that simple. 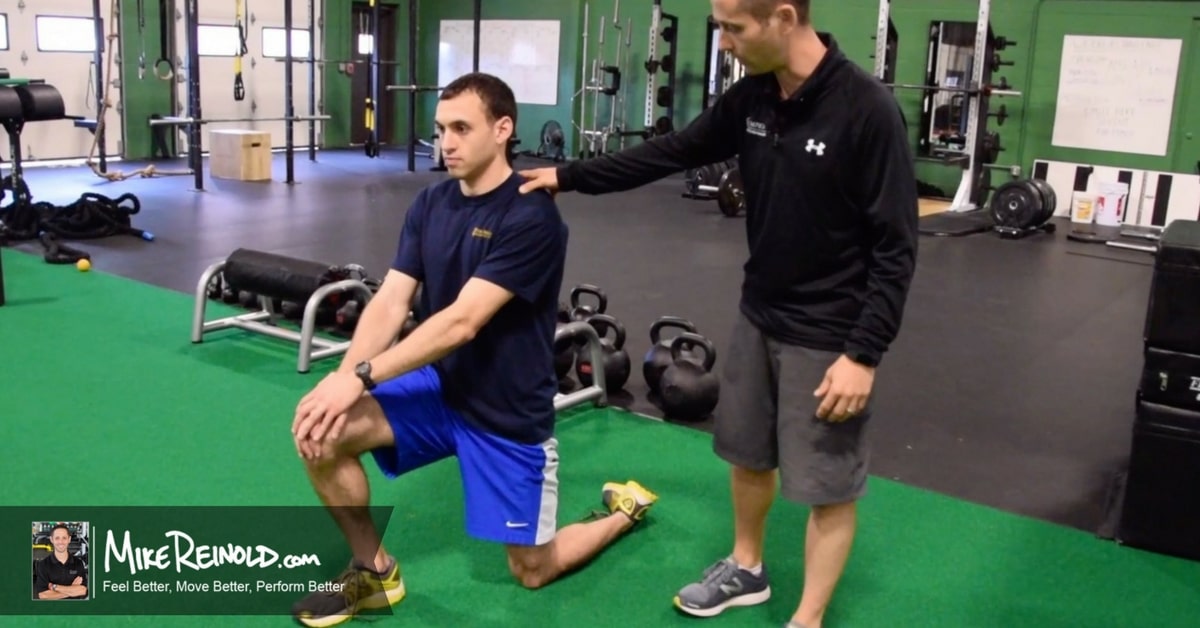 The hip flexor stretch has become a very popular stretch in the fitness and sports performance world, and rightly so considering how many people live their lives in anterior pelvic tilt. However, this seems to be one of those stretches that I see a lot of people either performing incorrectly or too aggressively.