Last week, Chris Johnson wrote a nice guest post on the importance of hip flexion strength.  I received a lot of questions about what to do next, how to strengthen, and how to assess functionally.  I wanted to add to the discussion a little bit and talk about more than just the assessment of static hip flexion strength.  As Chris points out, we still may be missing the boat on assessing hip flexion strength.  The research certainly supports it.  Many of us tend to focus on Janda’s lower cross syndrome and assume that the hip flexor group is chronically shortened and needs to be inhibited, while we focus on the abs and glutes for motor control. 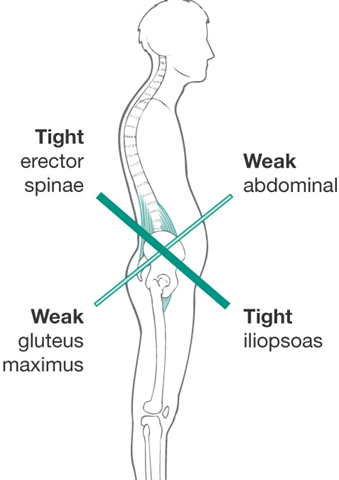 In my experience, a tight or shortened muscle group does not always have to mean that the muscle group is strong and does not need strengthening.  But by all means, if you are going to focus on hip flexion strengthening, you have to also assure that mobility is optimal.

I also think that another important concept to consider is that sometimes a lack of hip flexion strength can be due to poor movement patterns and compensation.  There are many muscles that help flex the hip to some extent (sartorius, TFL, rectus femoris, pectineus, adductor longus, adductor brevis, gracilis, and even the back extensors are agonists with the hip flexors).  Sometimes our postural habits, such as seen with the lower body cross syndrome, can alter our normal muscle firing.  In this example, the psoas is at a disadvantage in the shortened position with an anterior pelvic tilt.  This ultimately results in the body using secondary hip flexors to achieve the hip flexion motion, either due to alignment issues or inhibition.

So to piggy back on Chris’s excellent article and recommendation to test hip flexion strength, I would add that we also test functional movement patterns into hip flexion.  The hurdle step of the FMS would do this well, and compensatory patterns seen may indicate deficiencies with hip flexion.  The hurdle step takes a good look at the hip flexion movement pattern, but since it doesn’t require the person to maximally flex their hip, it isn’t always specific to the psoas.  Using Chris’s demonstration of a hip flexion strength assessment in the seated position is a good adjunct test to perform, as the psoas is needed to flex the hip past 90 degrees in the seated position.

Michael Boyle also often mentions a quick assessment that he does that tests the ability to hold your leg in hip flexion.  In this assessment, you passively raise the hip into flexion and then let go, trying to keep the hip flexed.  It’s harder than it looks for some people, especially those with inhibited psoas function.  Here are a couple of a quick video clips of two different demonstrations of the technique (sorry, filmed an impromptu clip of this at the home office, where the magic happens…).  In the first example, notice the difference in height of the leg on the left and right:

Did you notice that the right leg flexes much more than the left?  This is actually a demonstration of a compensation pattern.  Notice on the right that he lets his pelvis tilt posteriorly and his lumbar spine flex, which looks like a false amount of hip flexion mobility.  On the left, he is cued to not allow lumber motion and his true mobility is revealed.

In the second clip, I’m a good example because I have some deficits.  I consider no drop to be perfect, a mild drop but still able to keep the knee above 90 degrees to be a mild deficit (like me in the video), and the leg dropping to 90 degrees or below to be a problem.  As with any test involving hip flexion, again, be careful not to posteriorly tilt the pelvis and flex the spine.

I don’t think it is rocket science to show many of the common hip flexion strengthening exercises, though I would add that the most important aspects of the exercise needs to be lumbopelvic control and flexion past 90 degrees.  We need to train hip flexion without compensatory patterns at the spine and contralateral pelvis.

That being said, there are a few drills that I have used over the years that I think tend to help.  The first is a simple resistance band drill that involves laying on your back with a resistance band around your ankles.  This is a popular drill with many of the strength coaches that I have worked with but also works well for the rehab patient.  I know Michael Boyle talks about this in his sports hernia talks.

In this drill, it is easy to just focus on contralateral leg extension, but that isn’t the real goal of the drill.  The main goal is to drive into hip flexion and maintain.  I like this drill because it works on hip flexion drive as well as disassociating the two hips.  This exercise can be progressed and there are several similar drills in other positions, but I like to start supine as it helps keep the spine stabilized.  Like anything else, an abdominal brace with neutral spine is a must.

Why do I like this type of exercise?  The lunge (especially when using ipsilateral weights like I do in the video) incorporates glute and quadratus activity into a quad exercise.  As these muscles contract to switch the leg into mid stance and stabilize the spine, adding a hip flexion drive again works on disassociating the two sides of the pelvis.

Again, this isn’t rocket science, especially to the strength community, but some rehab specialists don’t always have this train of thought.  So don’t forget to assess functional hip flexion ability and to incorporate some of these hip flexion exercises into your programs.

Is a MRI Accurate in Detecting a Lumbar Disc Herniation in a Patient with Low Back Pain?

Predicting Which Patients Will Not Respond to Physical Therapy

The Importance of Hip Flexion Strength