3 Popular Exercises I Am No Longer Using

It’s almost 10 years since I wrote one of my most popular articles on this website, My Top 5 LEAST Favorite Exercises.

I still dislike all of those exercises, and today I wanted to share 3 more exercises that I am not going to use anymore. These are pretty popular exercises, so I expect many to disagree with me. I actually have no problem with you using these exercise, I just wanted to share some reasons why I have started to critically assess the value of them, and have considered not performing them anymore

Woah, I’m starting by throwing out a haymaker! Side planks?!? But everyone needs side planks!

Side planks are actually a great exercise for the core, and fairly common staple in people’s core programs. But over the years I have found that many people have complained about the impact the side plank position has on their shoulders.

I think the position has the shoulder abducted slightly below 90 degrees of abduction and then puts full body weight through the joint in a super orientated force vector: 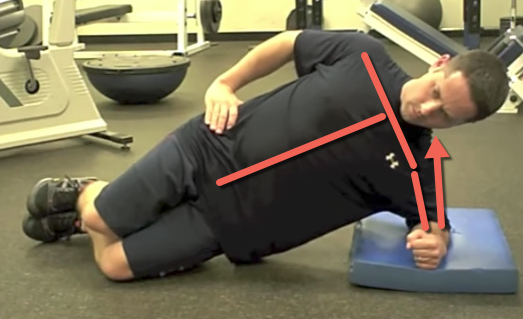 So I’ve added side planks as an exercise I’m not going to be using much in the future. There are variations that may work that place less strain on the shoulder, like the feet-off-the-bench variation, but other functional activities like weighted carries can likely provide a similar treatment or training effect, while not irritating the shoulder.

Now, realize I am biased. I work with a lot of people with shoulder pain and hypermobility. So perhaps my population tend to not handle them as well. But if my population doesn’t, maybe your population won’t either.

Next up is the TRX Y. I love the TRX, and the TRX Rip Trainer, two great devices. But I’ve always felt uncomfortable when performing a shoulder Y exercise using the TRX.

The shoulder Y is designed to incorporate upward rotation of the scapula, protraction, and posterior tilt of the scapula. It’s a great exercise for the lower trapezius.

However, when performed on the TRX, the Y exercises is drastically different, involving more scapular retraction and upward shrugging. Plus, the Y exercise is much more subtle, using your body weight, even at an angle, simply overloads the exercise and causes compensation. I think this promotes poor habits.

Just because two exercises may look the same, like the TRX Y and the Prone Y, doesn’t mean they have the same effect on the body.

My 3rd exercise is the wall hip flexor stretch. I’ve been pretty vocal on the fact that many people do this stretch poorly, hyperextending their back and placing more stress on their anterior hip capsule than on their hip flexors.

I popularized the use of the True Hip Flexor Stretch to help people shift focus on the right structures.

But even I sometimes felt that some people were Ok to do the standard wall stretch if they were “loose enough.”

You know what, I think those loose people actually just compensated more, like in the below video. So if we are really working on the flexibility of the hip flexors or on anterior pelvic tilt, I think we should all probably be sticking to a variation of the true hip flexor stretch and maybe just leaning forward more, than going back to the wall.

I really want to hear what you think, hit the comments below and let me know if you agree, disagree, or have more to add to this list! I don’t hate these exercises for everyone, but for now, these are a few I’m going to use less frequently.