A Simple Approach to Running Analysis for Clinicians

This week’s post is an amazing article by my friend Chris Johnson on what he looks for during a running analysis.  Chris is my go-to resource for running related injuries and rehabilitation.  He’s also recently developed an app on the iTunes app store to help runners, which I have reviewed and found to be really impressive.  Check it out at the end of this article!

A Simple Approach to Running Analysis For Clinicians The ultimate special test for runners is RUNNING.

For some odd reason, when runners seek medical consultation, clinicians routinely neglect watching them run during the rehab process. While it may not always be appropriate to take an injured runner through a formal running analysis at the time of presentation, at some point it’s imperative to take the time to watch them run. Only then will you gain a more complete understanding of perhaps what landed them in your hands in the first place.

A great deal of research has emerged over the past several years specifically looking at various characteristics of the running gait and their associated implications. A few prime examples include but are not limited to the following:

By taking the time to understand the running gait along with ways to shift loads in the lower extremity, clinicians will ultimately be in a better position to help runners return to consistent training in a timely manner through manipulating physical loads on the ecosystem.

While this may seem daunting to those new at running analysis, it can actually be quite simple.  The purpose of this post is to provide clinicians with a simple framework to approach conducting a running analysis using what I call “The Four S’s of Running Analysis.”  These are:

While it’s important to appreciate that overground and treadmill running are different animals, approaching every running assessment in a systematic manner is important. Clinicians are encouraged to use the resources at their disposal while understanding their relevance and limitations. By developing proficiency in performing a running gait analysis, clinicians will ultimately refine their clinical decision making and improve their outcomes in terms of restoring one’s float phase.

Before you even watch someone run, close your eyes and listen to the sound of their running gait. As clinicians, there is a great deal of information that can be ascertained by simply listening to one run.

One of the simplest cues to consider in the event that someone is “overstriking” is to simply instruct the runner to “quiet your feet down.” This may be particularly relevant if the goal is to reduce the vertical ground reaction force (vGRF).

It’s important to appreciate that when one does go to quiet down their feet, that they tend to increase the ankle and knee joint excursions. On the other hand, if landing sound increases, so does the vGRF secondary to decreasing ankle joint excursion while increasing the hip joint excursion (Wernli et al. 2016).

Let’s not complicate things! Does the runner land with a noticeable heel strike or forefoot strike, or do they exhibit a midfoot, or “flat-footed” contact? Is their strike symmetrical?

Also, the point in the race or training session we are discussing matters because one’s strike pattern tends to change over the course of the run, especially during competition (Larson et al 2011).

Over the past several years, there was a considerable buzz around forefoot striking as a means to address common running related injuries. This was due in large part to the book “Born to Run,” in conjunction with Daniel Lieberman’s classic manuscript that appeared in Nature (Lieberman et al 2010) coupled with a craze by the mass media.  It should be mentioned that coaches have long used barefoot training as means to incorporate variability into a runner’s program.

Training runners to incorporate a forefoot strike into their training may prove effective some, such as those with tibial stress syndromes, anterior compartment syndrome, and anterior knee pain.  Caution should be exercised in the context of a past medical history remarkable for injuries involving the calf muscle complex, plantar tissues of the foot, and/or metatarsals as it will bias the load to these regions.

On the other hand, if a runner is dealing with an Achilles tendinopathy or recovering from a calf muscle strain, a heel or rearfoot striking strategy would perhaps be indicated as research has shown that such a strategy reduces Achilles tendon force, strain, and strain rate relative to a FFS pattern (Lyght et al. 2016).

In my opinion, one strike pattern is not necessarily superior to others, but rather, that every strike pattern has unique characteristics and implications (Almeida et al 2015) and serves a purpose pending the context and intent.

By taking the time to understand the implications of each strike pattern, clinicians will be better able to understand the potential changes to consider making as a means to shift load to different regions of the lower extremity. As with any change, however, clinicians must be mindful that it should take place in a slow and gradual manner.

Finally, never take a runner’s word if they tell you that they utilize a certain strike pattern as research has shown that a runner’s subjective report of their strike is not necessarily accurate (Bade et al. 2016).

Running is largely about rhythm and timing.

It’s therefore no surprise that over the past several years, a considerable amount of research has focused on step rate or what’s more commonly known as cadence as a simple and practical means to address common running injuries. Because I think this is so important, I actually developed a cadence app, RunCadence, which is specifically designed to help runners and clinicians apply cadence to rehab and training for runners through the use of accelerometry coupled with a metronome.

Research has shown that increasing one’s step rate by as a little as five percent above preferred while keeping velocity constant can reduce shock absorption at the level of the knee by upwards of 20 percent. Additionally, increasing step rate by 10 percent above preferred significantly reduces peak hip adduction angle as well as peak hip adduction and internal rotation moments (Heiderscheit et al. 2011).

More recently, a study showed that irrespective of whether one utilizes a rearfoot or forefoot strike pattern that increasing one’s cadence by five percent results in lower peak Achilles stress and strain.

Lastly, clinicians should also bear in mind that increasing one’s step rate greater than 10% above preferred while keeping running velocity constant tends to occur at a greater metabolic cost so as they say, “the juice ain’t worth the squeeze.” So at day’s end, remember that the sweet spot is between 5-10% when it comes to increasing cadence based on the current body of literature.

Anytime one discusses running, it’s important that we account for the amount of ground covered in a given time. This is referred to as running velocity, which is the quotient of distance and time.

The typical units that we go by in the United States are min/mile or miles/hour (mph), though most of the world relies on the metric system (m/s or km/hr). So make sure you have a converter bookmarked on your web browser.

Running is typically classified into one of five categories based on speed (Novachek 1998):

Additionally, to run faster, a runner must push on the ground more forcefully, more frequently, or a combination thereof (Schache et al 2014).

At speeds < 7m/s the ankle plantarflexors reign supreme as they contribute most significantly to vertical support surfaces and increases in stride length (Dorn et al 2012). At faster speeds, however, the energy sources tend to shift proximal as a means to increase stride frequency in order to increase speed.

The reality is that most runners seeking our services will fall under the category of joggers and slow runners unless one works with speed based running athletes and short course racers.

Once a runner has reached a point in their rehab where they are a candidate to undergo a running analysis, the question naturally becomes, “what speed should we select?” This question is best answered by primarily considering the runner’s pre-injury status along with the severity, region, type of injury, and agreed upon goals.

It’s also essential to clearly identify the runner’s typical training and race intensities to better understand the entry point to having them run as well as the various speeds worth taking them through as part of the analysis.

It should also be mentioned that a thorough running analysis may require a couple sessions to work them up to faster velocities to ensure tolerance to progressive loading. Unfortunately, a common pitfall in the clinic is reluctance, or failure to have runners work up to faster speeds. This invariably leads to a myopic view of one’s running while engendering the potential for hasty clinical reasoning as we transition runners back to training.

In retrospect, running is an activity that has relatively predictable performance demands. By taking the time to develop proficiency in conducting a simple running analysis while applying the research as it relates to shifting loads in the lower extremity, clinicians will be better positioned to help runners return to consistent and healthy training and beyond. RunCadence was developed by two physical therapists to help the running community apply step rate to running via real time step rate notification and metronome.
Start using RunCadence to get more in tune with your running. While no shortcuts or “hacks” to running exist, gait retraining using cadence is the next best thing.  Click below to download:

Chris Johnson, PT, is the owner of Zeren PT and Performance in Seattle, WA.  In addition to being a highly skilled physical therapist and performance enhancement specialist for runners, Chris is also certified triathlon coach (ITCA), three-time All-American triathlete, two-time Kona Qualifier, and is currently ranked 16th (AG) in the country for long course racing.

The clinical examination to detect a hamstring strain is fairly straightforward. However, to determine the most optimal rehabilitation program and return to sports progression, it’s important to have an evaluation process to assess the severity of hamstring strain injury. This will serve as an initial baseline to determine the severity, as well as to compare the athlete’s progress over time. 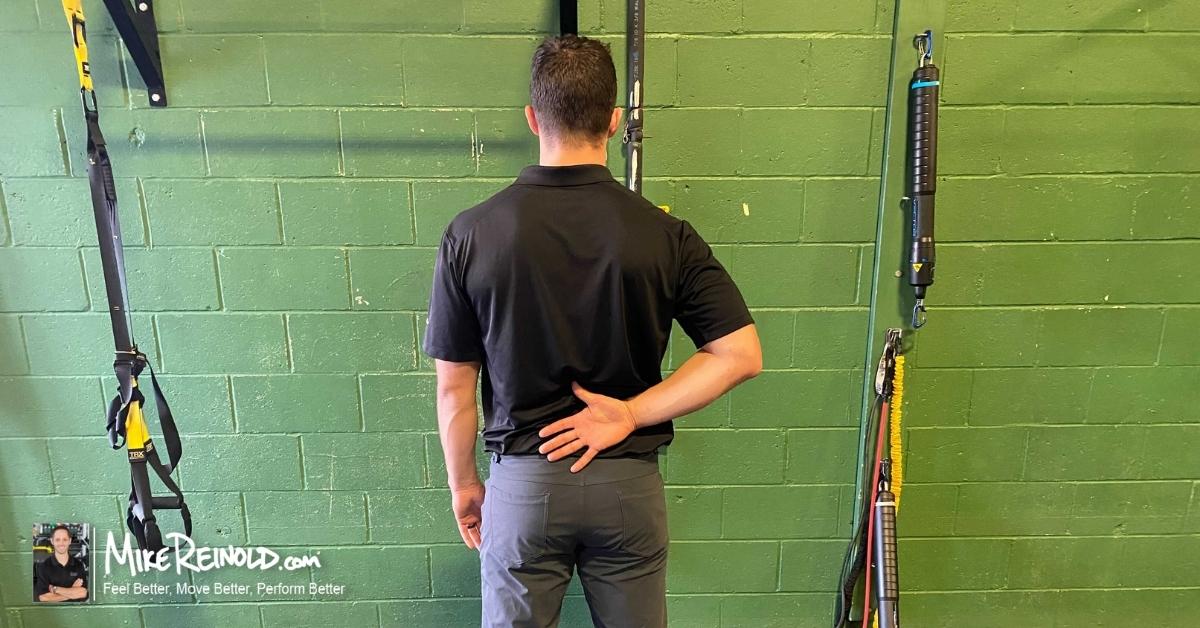 Does Reaching Behind the Back Actually Measure Shoulder Internal Rotation?

Does reaching behind the back actually reflect internal rotation of the shoulder? What the research shows, clinical Implications, and more.