One thing I talk about a lot when it comes to training and rehabilitation is the need to train the body in all three planes.  This often requires moving in one plane of motion and stabilizing in the other two.   We are often very good at moving in the sagittal plane, and poor at stabilizing in the transverse and frontal planes.  This is a big topic of discussion in my program Functional Stability Training of the Lower Body. 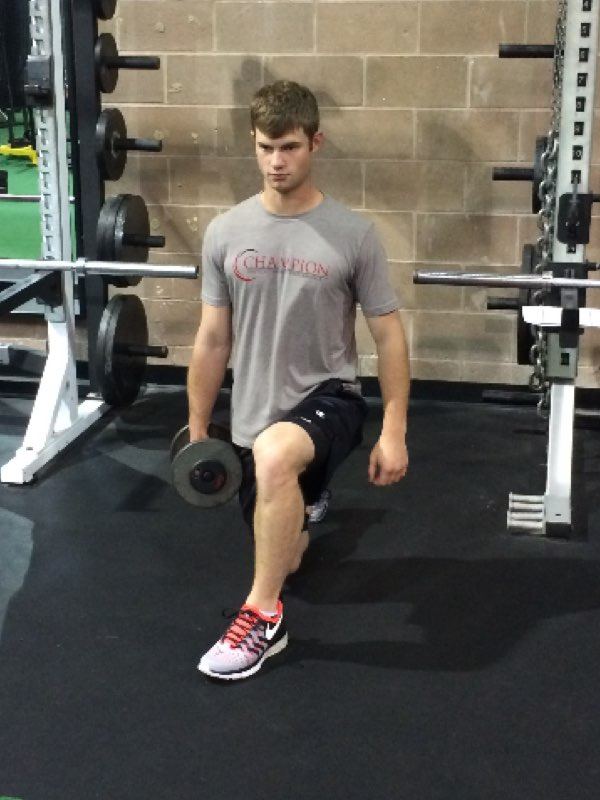 A recent study was published in the Journal of Strength and Conditioning Research that investigated the effect of holding a dumbbell in either the contralateral or ipsilateral hand during a split squat and forward lunge.  (Note: they called it a “walking lunge” but I am 99% certain it was a forward lunge, so I’m just going to say forward lunger in this article…  probably just semantics.)

The study found that:

I was a bit surprised that glute med activity was not impacted during the split squat, but perhaps the static nature of the position inherently requires less transverse and frontal plane stability.

There was one other finding from this study that I thought was interesting.  Kinematic differences during the forward lunge were found between a group of trained individuals in comparison to a group without training experience.

This makes sense as the forward lunge is a complex movement pattern that requires an understanding of how to control the pattern.  It requires both mobility and stability, but also the ability to control the eccentric deceleration phase. However, there were no kinematic differences between training age during the split squat, meaning that both novice and experienced trainees performed the split squat in a similar fashion.  This make split squats a great exercise to incorporate in the early phases of training for those with limited training experience, eventually progressing to forward lunge as they get better at moving and stabilizing the pattern.

This helps solidify the use of split squats in our lunge regression system.

I like simple studies like this.  Having the rationale to make small tweaks to your program is what sets you apart.  It’s the small things that may not be obvious at first but will produce better results over time.

Based on these results, I would recommend using the split squat with bilateral dumbbells to maximize strength gains since a unilateral load did not alter glute med activity.  The split squat is more of a basic exercise, so why not just use it to work on strength gains in the novice trainee.  As the person progresses, you can add the forward lunge variation with a contralateral load to enhance triplanar stability.

https://mikereinold.com/wp-content/uploads/The-Effect-of-Ipsilateral-and-Contralateral-Loading-on-Muscle-Activity-During-the-Lunge.jpg 800 600 Mike Reinold https://mikereinold.com/wp-content/uploads/MikeReinold-Small-Signature-Logo-2017-red.png Mike Reinold2015-06-15 06:00:502020-04-21 10:07:26The Effect of Ipsilateral and Contralateral Loading on Muscle Activity During the Lunge Side Plank Clam and Side Plank Hip Abduction Exercises
6 replies