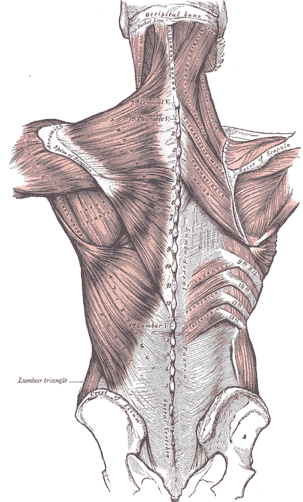 Today’s guest post is about the thoracolumbar fascia from Patrick Ward.  I have been reading Patrick’s website for a while now and have always been impressed his content, but he also has the ability to write and communicate in a fashion that fosters thought and learning.  I have been talking with him for months about sending me a guest post, so I am happy to finally have one, thanks Patrick!

For this reason, the thoracolumbar fascia can be an important area for treatment both in instances of injury/pathology or when developing a recovery/regeneration treatment protocol for certain athletes.

The thoracolumbar fascia can be thought of as having three layers which help to separate the muscles in this region into compartments:

The transverse abdominus, internal oblique, and quadratus lumborum all invest themselves into portions of the thoracolumbar fascia.  According to Neumann (2010), the transverse abdominus provides anticipatory/feed-forward stabilization of the lumbo-pelvic region via a tensioning of the thoracolumbar fascia and an increase in intrabdominal pressure.  The connection that the thoracolumbar fascia has with the posterior ligaments of the lumbar spine allows it to assist in supporting the vertebral column when it is flexed by developing fascial tension that helps control the abdominal wall (Gracovetsky, 1981) and it may also provide some sensory function to the body aid in both postural and protective reflex activity (Yahia, et al., 1992).

The biomechanical role of the thoracolumbar fascia is generally understood by individuals in the strength and conditioning and rehabilitation professions.  Exercise programs or “core training” programs are typically designed to elicit some sort of stabilization activity to the muscles in this region.  However, insight into the myofibroblasts and mechanoreceptors of the thoracolumbar fascia may require us to look a bit deeper if we wish to make larger changes to the function of the human body.

Myofibroblasts are cells that have a sort of dual function, being part fibroblast and part smooth muscle.  It is because of these smooth muscle properties that the myofibroblasts can contract on their own – like other smooth muscles cells – placing them under the control of the autonomic nervous system and allowing the autonomic nervous system to potentially regulate fascial pre-tension independently of muscular tone.  Thus, the fascial system is an adapting organ which almost has a “life of its own.”

Schleip and colleagues (2006) showed that the lumbar fascia, via its myofibroblasts, has the ability to contract in situations of either chronic tissue contractures, such as tissue remodeling, or during more smooth muscle-like contractions, which may help to influence low-back stability.  Furthermore, Yahia et al. (1993) showed that the thoracolumbar fascia had the ability to spontaneously contract when the tissue was stretched and held at a constant length repeatedly, causing the fascia to slowly begin to increase resistance.  This information could be potentially beneficial in understanding pathologies where increased myofascial stiffness is present.  However, influencing the system to make a change in this stiffness is a more difficult question.

Does it Come Back to Breathing?

Given the smooth muscle properties and the control that the autonomic nervous system may have over the fascial network, perhaps a potential window into effectively dealing with increased myofascial tone can circle around to breathing.

Respiratory function is on aspect of the autonomic nervous system that we actually have direct control over.  We can change our breathing and help to elicit a parasympathetic response to allow for greater relaxation and potentially less overall tissue tone/tension, hopefully leading to more of a comfortable state of being a decreased threat perception.  Additionally, the role of the diaphragm in stabilizing the lumbar region cannot be overlooked and the fact that it shares a fascial connection with the quadratus lumborum (as well as the psoas major) and the transverse abdominus fibers invest themselves into part of the diaphragm means that the diaphragm is in a potentially prime position to have an influence over the thoracolumbar fascia, since both of these muscles invest into layers of that fascial structure.

Manual Therapy of the Thoracolumbar Fascia

The thoracolumbar fascia is richly innervated with mechanoreceptors providing it with a strong sensory role and making it a target for manual therapy.

There are many ways to address the body with manual/touch therapy.  The idea of treating “fascia” has been a hot topic as of late and oftentimes therapists are doing similar things however explaining them in different ways, leading to large semantics debates.  With regard to treating fascia I believe that it is important to not leave out the nervous system, as the goal of any manual hands on treatment is to somehow effect the brain to create an environment that is ripe for healing – one which decreases overall threat perception, decreases fear avoidance, and opens a window for the individual to perform some sort of non-painful movement that increases confidence, and create relaxation (again, helping to achieve a parasympathetic response).

The thoracolumbar fascia plays an important role in human movement as it not only serves as an attachment site for numerous muscles in the lumbar, thoracic, and sacral regions, but also is an important area of transition between the upper and lower extremities where forces are transferred to allow for coordinated function.

Understanding the implications that the thoracolumbar fascia has over the body will help therapists to develop both exercise programs and manual therapy/hands on treatment programs for either rehabilitation or recovery (to help increase relaxation in this area between competitions and prevent overuse or excessive strain which is common in sport).

The smooth muscle properties of the thoracolumbar fascia (and all fascia of the body) indicate a potential role of the autonomic nervous system in regulating fascial tone.  For this reason, understanding the individual athlete and levels of stress as well as their individual stress resistance can be helpful in managing overall fascial tension.  The pH of the body plays an important role in fascial tension, as greater levels of alkalinity create vasoconstriction and increased muscle tone.  The pH of the body can be influenced by increased levels of threat and changes in breathing, which cause alterations in expired CO2.  Thus, breathing, relaxation, and/or meditation, may be potential ways in which the fascial system can be influenced in a training or therapy session.  Managing stress using a variety of recovery modalities in between competitions can be help to keep athletes healthy and performing well.

Finally, the high number of mechanoreceptors found in the thoracolumbar fascia (and in all fascia) indicate that the fascial system provides an important sensory role for the body.  Various manual/hands on therapies can be utilized to influence the sensory system (and the brain) to help decrease tone/tension, improve proprioception and awareness to the area being treated, decrease threat perception, increase relaxation, and provide a window into the parasympathetic nervous system which can potentially create an optimal environment for healing.

Taking all of this into consideration, when assessing an athlete it is important to look at the entire body and keep in mind that the thoracolumbar fascia shares a connection with many structures and its influence can be seen as far up as the cervical region and into the extremities.  With that in mind the thoracolumbar fascia may be a potential area for therapy when attempting to influence other parts of the body.