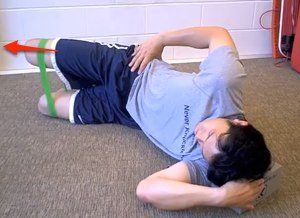 Why I Like the Hip External Rotation Clamshell Exercise

I want to again reiterate that there are a lot of exercises for hip external rotation that I use everyday, but I highlighted the clamshell exercise for it’s simplicity and effectiveness.

I have talked in the past about the importance of strengthening the gluteus medius and some of the dysfunction that can occur with poor coronal plane strength.  We really are a sagittal plane society and this has a large impact on many of our dysfunctional movement patterns, so strengthening muscles that externally rotate the hip is important.  If this isn’t something you’ve been emphasizing, go back and read some of the above links.

EMG studies have shown that the clamshell produces a good amount of gluteus medius and gluteus maximus activity, especially if technique is excellent.  Notice in the video below that I really emphasize placing your hand along your iliac crest.  This helps to cue to body to not rotate and incorporate the low back, which is likely the most common fault during this exercise, especially in those that have really weak glutes.  Also, by placing your hand on your hip like this, you can put your thumb on your glutes to feel and facilitate the contraction.  It really helps with your technique.

It should also be noted that the contralateral leg, the one of the bottom, has to isometrically stabilize into hip ER, to prevent the band from pulling the bottom leg up, so again, just another reason why I like the clamshell exercise.

Hip Clamshells in the Neutral Position

While performing the clamshell exercise for hip external rotation has been shown to produce similar amounts of gluteus medius EMG activity in the 30 degree and 60 degree positions of hip flexion, I also like to perform the exercise with hip flexion at 0 degrees, or neutral.  The majority of us already have overactive hip flexors, so anytime I can work the hip muscles outside of the hip flexed position is good.  It is also well documented that the posterior moment arm of the gluteus medius is decreased while the hip is flexed, making the glute medius less effective in externally rotating in this position.  Hip ER in a flexed position likely increases the contribution of the gluteus maximus and deep external rotators.

In the video below, I demonstrate the hip clamshell exercise in neutral, or 0 degrees of hip flexion.  The first thing you’ll notice is that my range of motion is less.  This is normal and not indicative to poor performance in this position.  Normal range of motion for hip ER is about 30 degrees with the hip extended and 50 degrees with the hip flexed. You will notice that people with weak glutes will not like this exercise as much because it is more difficult!  Even more reason to be using it.

What do you think?  Have you performed any variations of the clamshell exercise that you feel are essential?  I know there are many more tips and alternative exercises, but I hope these videos clarify some of my thoughts when discussing strengthening the gluteus medius by performing hip external rotation with the clamshell exercise.