The following is part 6 of the series on solving the patellofemoral mystery:

Articulation of the Patellofemoral Joint

The patella really is an amazing bone in our body.  Did you realize that the artiuclar cartilage on the undersurface of the patella is the thickest in the body?  That really is amazing and shows just how much force is applied to the joint.  Take a look at the picture on the right, notice how thick the cartilage is in comparison to the bone?

When rehabilitating a patient with a known lesion of the patellofemoral joint, it its important to understand the joint arthrokinematics. Articulation between the inferior margin of the patella and the femur begins at approximately 10 – 20 degrees of knee flexion.  The patella does not articulate with the trochlea near terminal knee extension.  As the knee proceeds into greater degrees of knee flexion, the contact area of the patellofemoral joint moves proximally along the patella and posterior along the condyles. 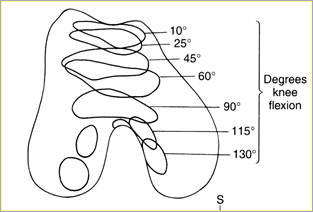 This is an important concept to understand and emphasizes the importance of good communication between the physician and rehabilitation specialist.  If we know the specific area of articulation, we can work around that area, otherwise we don’t know when a lesion will articulate and will have to be more conservative.

In addition to understanding when the patellofemoral articulates, it is important to discuss the area of contact.  Obviously, contact between the patella and trochlea that covers a larger surface area will distribute the load over a greater area.  This is a driving factor in exercise selection and will be talked about below.  At 30 degrees, the area of patellofemoral contact is approximately 2.0cm2. The area of contact gradually increases as the knee is flexed. At 90 degrees of knee flexion contact area triples,  increasing up to 6.0cm2.  As you can see, The contact area initially is small and gradually increases as the joint become more congruent. Alterations in Q-angle are often associated with patellofemoral disorders and may alter the contact areas and thus the amount of joint reaction forces of the patellofemoral joint. Huberti and Hayes examined the in vitro patellofemoral contact pressures at various degrees of knee flexion from 20 – 120 degrees. Maximum contact area occurred at 90 degrees of knee flexion and was estimated to be 6.5 times body weight. A increase or decrease in Q-angle of 10 degrees resulted in increased maximum contact pressure and a smaller total area of contact throughout the range of motion. This information may be applied when prescribing rehabilitation interventions so that exercises are performed in ranges of motion that place minimal strain on damaged structures.

We have already discussed the articulation and contact area.  Again, joint forces are reduced when distributed over a large surface area.  When we discuss lever arms, remember that the patella’s true function is to increase the mechanical advantage of the quadriceps muscle.  Take a look at the diagram below, notice how the resultant force (red arrow) vector increases as the knee flexes and the line of pull from the quadriceps and patellar tendons causes a more compressive force? I wish it were that simple and we could say that joint reaction forces are always highest as the knee flexes.  Unfortunately, we have to take muscle contraction into consideration as well.  The quadriceps is designed to cause compression of the patellofemoral joint.  The force of the quadriceps is greatest at terminal knee extension, that is why patients with patellectomies have such a difficult time extending their knees, they lost the biomechanical advantage of the patella and can not produce enough quadriceps force to fully extend the knee.

To demonstrate just how significant these forces are, take a look at the below table that I put together from various sources for a 200 pound person.  Notice how deep squatting applies close to 4000 lbs of force to the patellofemoral joint (still want to squat?).

The effectiveness and safety of open kinetic chain (OKC) and closed kinetic chain (CKC) exercises have been heavily scrutinized in recent years. While CKC exercises replicate functional activities such as ascending and descending stairs, OKC exercises are often desired for isolated muscle strengthening when specific muscle weakness is present.

When analyzing the biomechanics of the OKC knee extension, remember the concept from above regarding the quadriceps force near extension.  Grood et al reported that quadriceps force was greatest near full knee extension and increased with the addition of external loading. The small patellofemoral contact area observed near full extension, as previously discussed, and the increased amount of quadriceps force generated at these angles may make the patellofemoral more susceptible to injury. At a lower range of motion, the large magnitude of quadriceps is focused onto a more condensed location on the patella.

My friend Rafael Escamilla has published a few new studies on patellofemoral joint forces during the lunge and squatting exercises.  The first study, published in Clinical Biomechanics, demonstrated that the front and side lunge exercises showed the same pattern of force as the squatting and leg press, with more force the deeper the lunge.  Interestingly, performing the lunge from a split-stance position (not actually striding to perform the lunge) also showed a decrease in force and should be used initially.  His follow-up study demonstrated that a longer stride has less force than a shorter stride during the forward lunge.

Escamilla also analyzed the patellofemoral joint reaction forces between the wall squat (performed with feet close to wall and far away from wall) and the single leg squat.  Results indicate that the closer your feet are to the wall, the greater the force during the wall squat exercise.  At deeper angles > 60 degrees, the wall squat produced greater force than the one legged squat.  Interesting results that should be applied to our exercise prescription.

When applying the results of Steinkamp(38), Escamilla(39), and Grood(40), it appears that during OKC knee extension, as the contact area of the patellofemoral joint decreases the force of quadriceps pull subsequently increases, resulting in a large magnitude of patellofemoral contact stress being applied to a focal point on the patella. In contrast, during CKC exercises, the quadriceps force increases as the knee continues into flexion. However, the area of patellofemoral contact also increases as the knee flexes leading to a wider dissipation of contact stress over a larger surface area.

Recently, Witvrouw et al (41) prospectively studied the efficacy of open and closed kinetic chain exercises during non-operative patellofemoral rehabilitation. 60 patients were participated in a 5-week exercise program consisting of either open or closed kinetic chain exercises. Subjective pain scores, functional ability, quadriceps and hamstring peak torque, and hamstring, quadriceps, and gastrocnemius flexibility were all recorded prior to and following rehabilitation as well as at 3 months proceeding. Both treatment groups reported a significant decrease in pain, increase in muscle strength, and increase in functional performance at 3 months following intervention.

Thus it appears that the use of both open and closed kinetic chain exercises may be used to maximize outcomes for patellofemoral patients if performed within a safe range of motion. I prescribe the form of exercise based on the clinical assessment. If CKC exercises are less painful than OKC exercises, than that form of muscular training is encouraged. Additionally, in postoperative patients, regions of articular cartilage wear is carefully considered before an exercise program is designed. Most frequently, I’ll allow open kinetic exercises such as knee extension from 90 – 40 degrees of knee flexion. This range of motion provides the lowest amount patellofemoral joint reaction forces while exhibiting the greatest amount of patellofemoral contact area. Closed kinetic chain exercises such as the leg press, vertical squats, lateral step-ups, and wall squats (slides) are performed initially from 0 to 30 degrees and then progressed to 0 to 60 degrees where patellofemoral joint reaction forces are lowered. As patient symptoms subside, the ranges of motion that are performed are progressed to allow greater muscle strengthening in larger ranges. Exercises are progressed based on the patient’s subjective reports of symptoms and the clinical assessment of swelling, painful crepitus, and discomfort.

Continue on to Part 7: Understanding the clinical implications of the kinetic chain: The influence of the hip and foot on the patellofemoral joint